Sukhothai, located in the north-central Thailand, was one of the most important historic state in mainland Southeast Asia. It was at its height in the fourteenth to sixteenth century CE (500-700 years ago). Sukhothai is renowned for its Buddhist Theravada culture and art. The Sukhothai state followed its own artistic evolution and it absorbed influence of Lopburi tradition. The Sukhothai people embraced the Buddhist faith and tradition from Lanna, Lanka (the present-day Sri Lanka), and Bakan (in the present-day Myanmar). The rapid assimilation of all these elements forged what is known as the “Sukhothai style.” The Sukhothai style is regarded as a “golden era” of Thai art. Walking Buddha is a fine example from the prime of Sukhothai style. It is considered to be an iconographic representation unique and specific to its time.

The kingdom of Sukhothai arose when the former Dvaravati and Khmer rulers of the region started to weaken. Tai people, who had migrated from China and surrounding countries, were integrated into the society. Two chieftains defeated the Khmer governor of Sukhothai and enthroned Sri Intradit, the first king, marking the founding of the Sukhothai kingdom. The third king, Ramkhamhaeng the Great, brought the kingdom to its apogee, expanding the territory. He is regarded as being a strong administrator, a wise lawgiver and a brilliant statesman. The Siamese people embraced the Buddhist faith from Dvaravati influences and adopted Brahmanic rituals and Hindu gods from the Khmers. Unlike the Khmer kings, the Sukhothai leaders were available to their people and are still held in great reverence today. A tremendous innovation of that time was the creation of the Thai alphabet based on earlier Khmer. Mon and South Indian script. During this Golden Age the most outstanding creative achievement is the Walking Buddha with its fluid elegance. 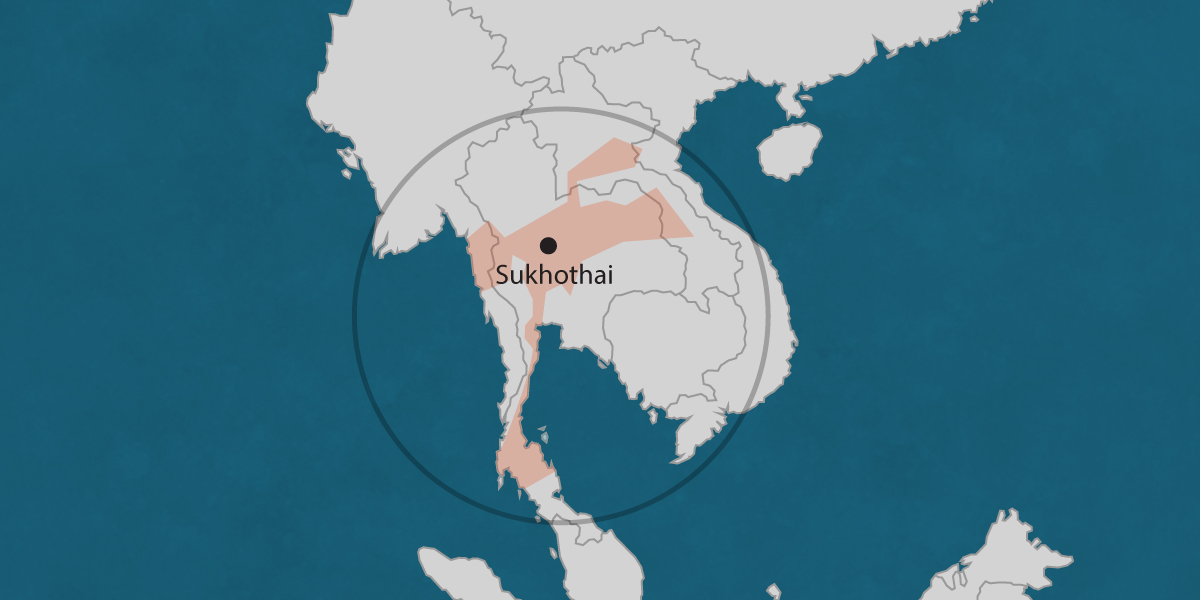 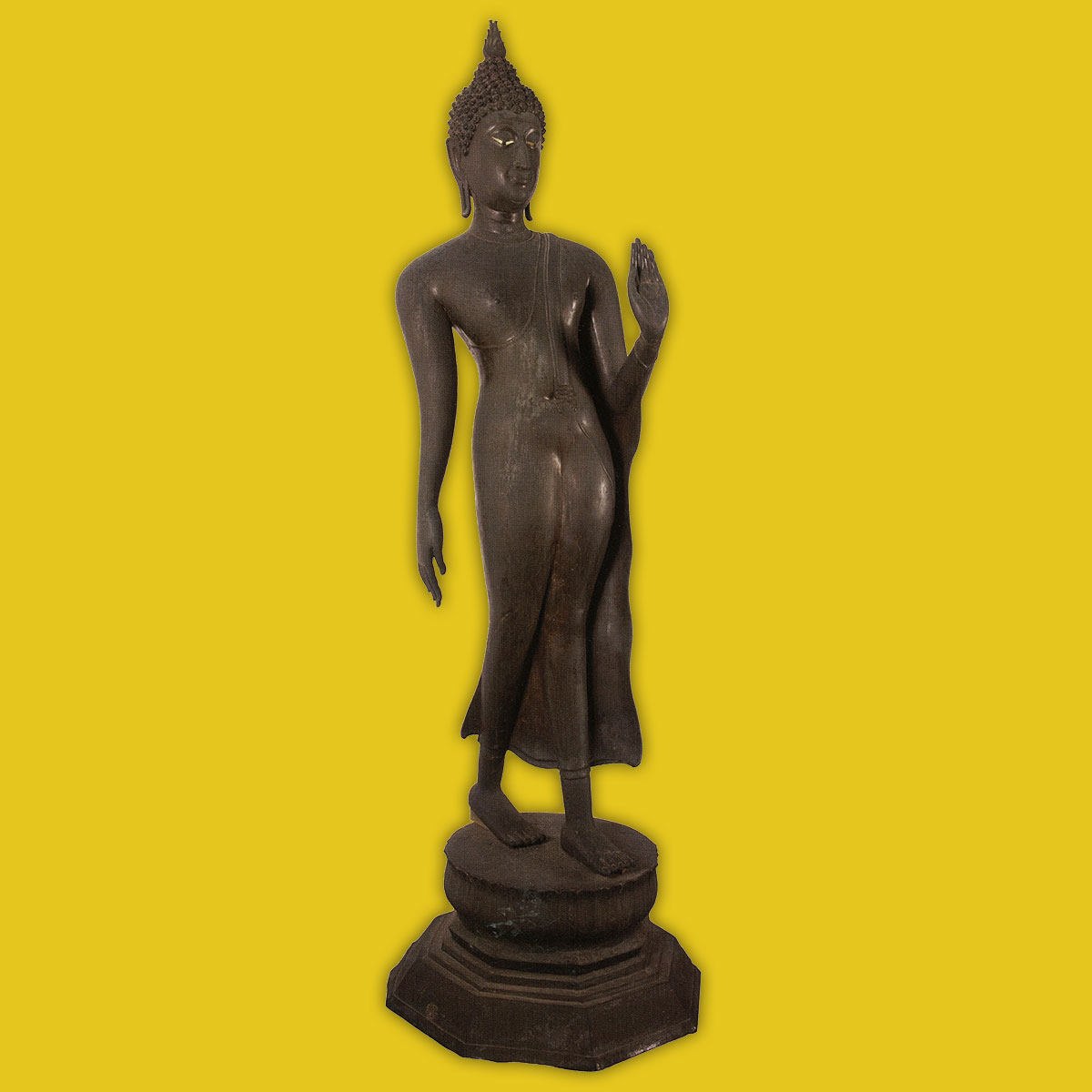 Displaying the remarkable expression, splendor and creativity of the Sukhothai artisans, this freestanding sculpture highlights the striking innovation of this golden era: walking Buddha images in the full round. In Thailand, raising the left hand in abhaya mudra represents the Buddha forbidding the sandalwood image from leaving his seat to greet him upon his return from Tavatimsa Heaven, where he had preached to his mother. The artisans’ mastery of bronze is captured in the figure stepping, left foot forward, right heel raised, while the upper body leans back in graceful movement. The aura of serenity and spirituality is enhanced by the smooth fluidity of the bronze form, a material that makes possible the lissome right arm resembling “the trunk of a young elephant”. A single line flowing over the chest implies the simple garment adorning this asexual, supernatural image; the radiance of the golden skin diffuses through the monastic robe; and the notched fishtail of the shoulder flap extends to the navel. Scarcity of anatomical detail denotes lack of interest in the material world and the flame-like finial symbolizes spirituality. This statue is the epitome of the Sukhothai style. 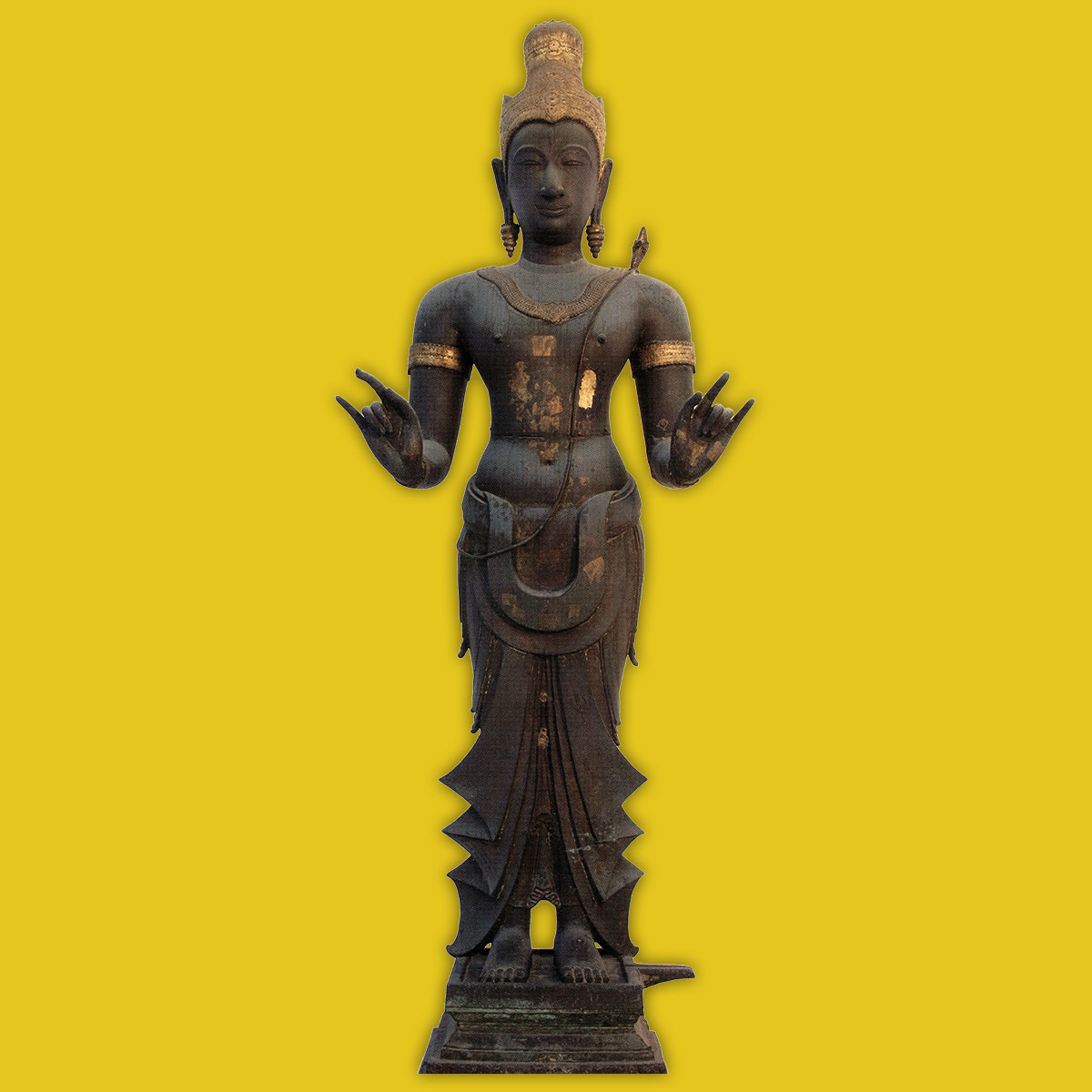 Monumental and majestic, this imposing statue of Shiva stands upon a square-shaped yoni pedestal representing the feminine creative energy. Shiva is identified by his third eye, the crescent moon in his hair, and the Brahmanical cord with three naga heads on his shoulder. The dhoti has complex fishtail pleats and is secured at the back by a circular floral-design belt. Idealizing the king’s image and the court style, the statue is decorated with gold accessories: diadem, necklace, and bracelets. Moreover, Shiva’s hands would have originally held his attributes, including a trishul or trident. According to scholars, the Sukhothai King PhyaLithai consecrated this Shiva statue in the Year of the Ox, dating the statue to 1349 CE.