The term Lopburi derives from the town or state’s name “Lavapura that emerged in Thailand in the seventh century CE. This term refers to a typical style of Hindu and Mahayana Buddhist sculptures and architectures found in the central, east and northeast regions of Thailand during the seventh to thirteenth century CE (800 – 1,400 years ago). There had been long cultural relation and interaction between the ancient states of Thailand and those of Cambodia. The style was comparable with those styles of Khmer sculptures and architectures in Cambodia, therefore, the ‘Ancient Khmer Style of Thailand’ is used as an alternative term for ‘Lopburi Style’. Despite its cultural connections, the artworks of the ancient Cambodia and those of the regions had their own distinctive features.

Over time, rulers mixed Hindu cosmology and astrology with Mahayana, Tantric and Theravada Buddhist beliefs. During King Suryavarman’s reign in the early 11th CE, a complex system of symbolic artistic structures and elements were implemented in Lopburi, a joining of Khmer administrative capital and Theravada Buddhist kingdom, merging Dvaravati art with Khmer designs. Artisans learned stone carving techniques, building temples decorated with magnificent reliefs and statues, and gave life to sculptures characterized by soft, round forms and gentle smiling faces of bodhisattvas. Khmer Angkor and Bayon styles of architecture influenced the mandala layout of wats, prang towers, lotus bud chedis in Sukhothai, and balustrades decorated with nagas that flank the stairs of Lanna temples. A millennium after the decline of the Khmer Empire, the shadow of its former grandeur is still omnipresent in Thai art and architecture today. 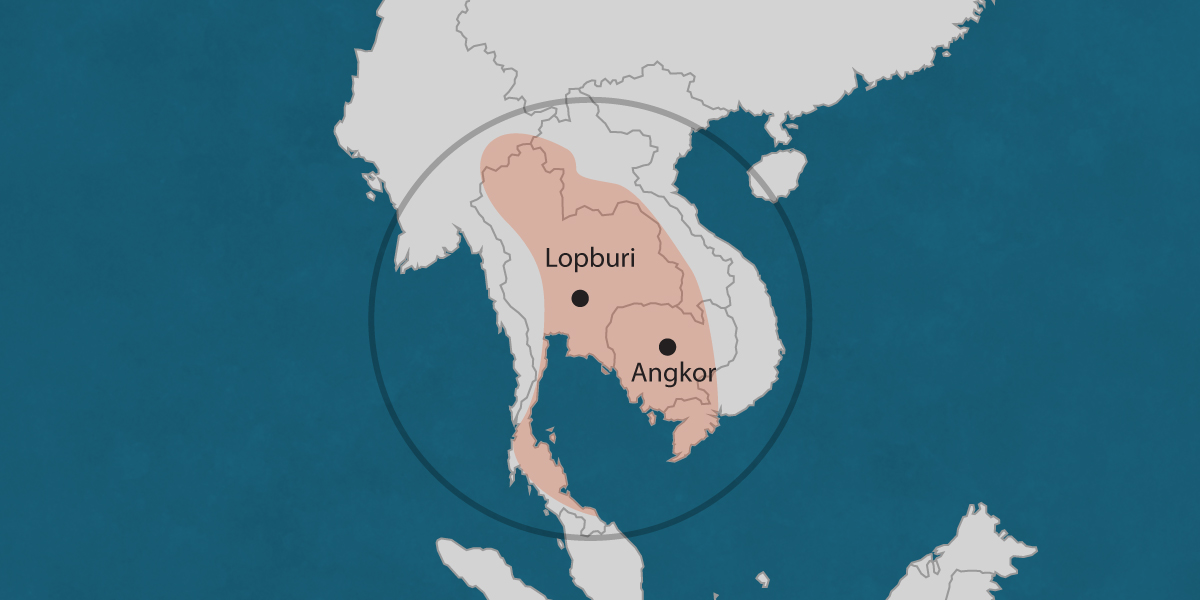 This bas-relief was found in northeast Thailand above a doorway in a Khmer-style temple. It was illegally exported from Thailand in 1964, claimed as stolen and subsequently returned to the National Museum Bangkok after much controversy. The reason for the international excitement surrounding this piece is obvious at first sight. It is an exquisitely carved and well-preserved specimen of a favorite Hindu story, the creation of the universe. Vishnu is reclining in cosmic slumber, lying atop a dragon-headed, lion-bodied creature, floating in the ocean of churning milk. Lakshmi, the goddess of good fortune, and Bhumi, the goddess of the earth, generate circulatory energy by massaging the sleeping Vishnu’s legs. From the cosmic ocean, the universe is born. According to myth, after millions and millions of years, it declines and dies and is then recreated. Once Vishnu has absorbed the detritus of the past universe, he dreams up a new, ideal universe; and from his naval sprouts a golden lotus with a thousand petals. When the lotus opens, the god Brahma emerges to create what Vishnu has dreamt. 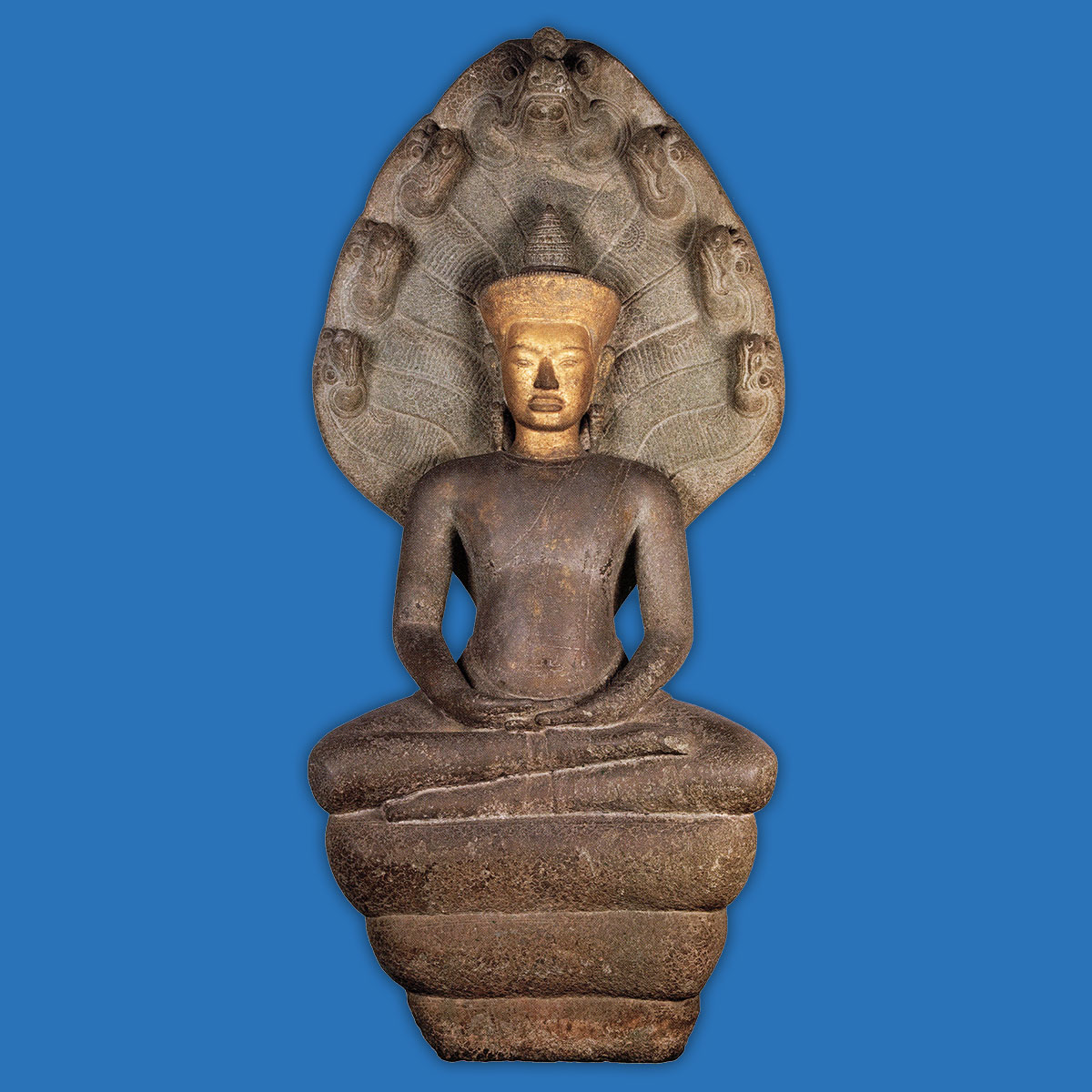 In the sixth week of his enlightenment, the Buddha meditated under the tree where Muchalinda, a naga king, lived. A sudden thunderstorm threatened to flood the area where the Buddha was seated; and, seeing the danger, the serpent coiled his body under the meditating Buddha, lifting him out of the floodwaters. He covered the Buddha with his seven-headed hood sheltering him from the heavy rain. Here, the Buddha wears a crown and earrings; by contrast, his body is austere and angular. The lines of the golden face are distinctly horizontal, as seen in the brows, the eyes, and the broad, outlined lips. Gold leaf is placed on a Buddha image by worshippers as an act of devotion. During the fall of Ayutthaya in the 18th C, the temple Wat Na Phra Men was spared, leaving this image for posterity. 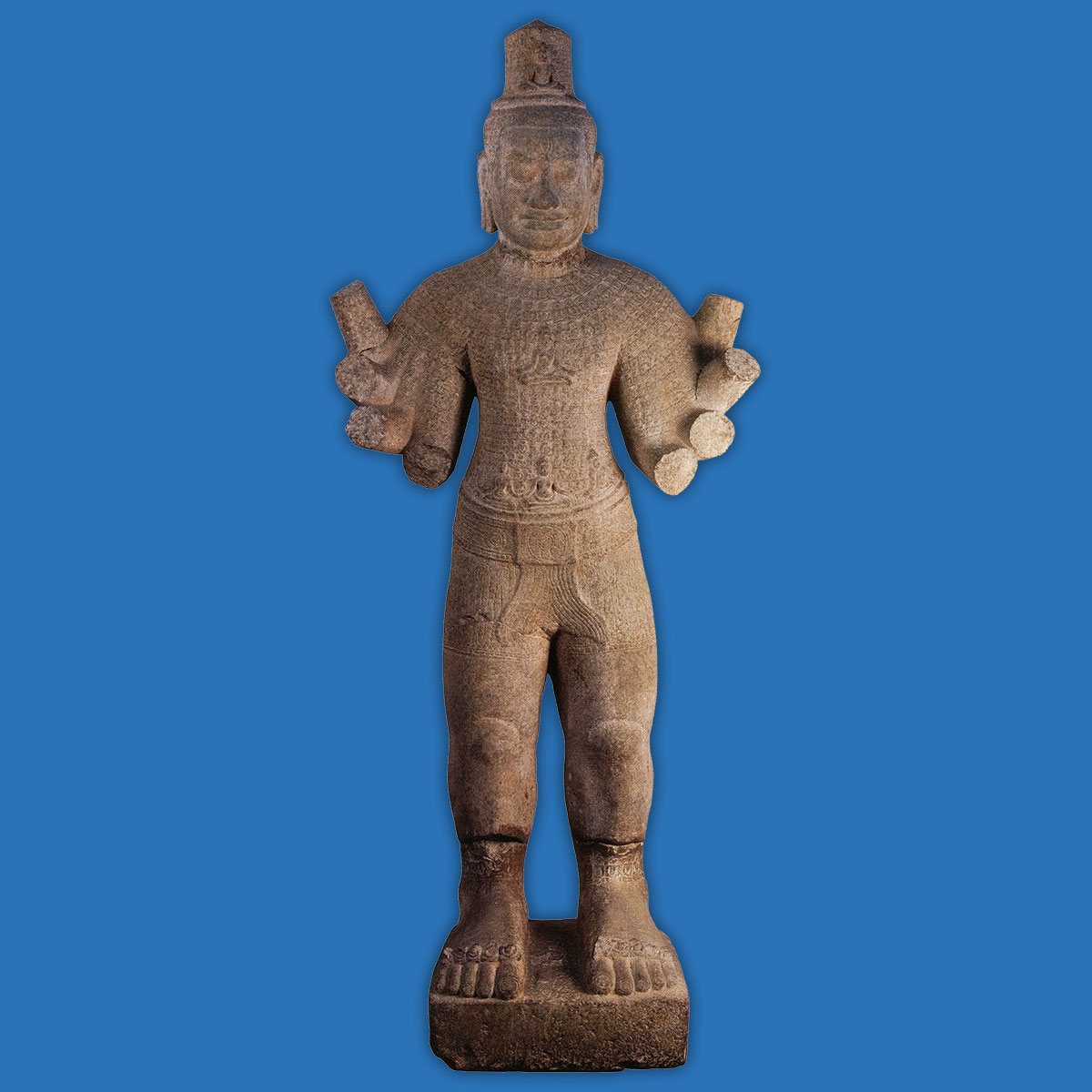 The skill, power, and sheer size of the Khmer Empire under King Jayavarman VII are evident in the details of this stone rendering of the bodhisattva Avalokiteshvara in his radiating form. Jayavarman VII built roads and a network of rest houses and mercy centers linking the far-reaching outposts of his empire. To these outposts, Jayavarman VII sent many images carved in his likeness to promote Mahayana Buddhism and to portray himself as a compassionate ruler. Avalokiteshvara is the bodhisattva of mercy who emanated from the Amitabha Buddha’s eye while he was meditating. A figure of the Amitabha Buddha resides in front of the headdress and small depictions of him cover the statue; all represent the entirety of the universe that radiates from every pore of Avalokiteshvara’s skin. The closed eyes, enigmatic smile, fishtail panel of the loincloth, and the leaf-shape pendants in the belt reflect the Bayon style. The radiating form is known to be limited to this style and is, therefore, rare. One interpretation identifies the figures, centered on the chest and encircling the waist, as Prajnaparamita, goddess of transcendent wisdom, making this piece rarer still.