The oldest recognized kingdom that makes up todays modern Thailand is Dvaravati, dating back to the eleventh century CE (1,000 – 1,500 years ago). This fascinating kingdom of Thailand is recognized as the earliest Buddhist culture, developed from the societies in the central part of Thailand and then spread to other parts of the country; The Dvaravati culture had developed initially from prehistoric and early historic cultures and assimilated aspects of Indian culture. The majority of the Dvaravati sculptures reflect the Theravada Buddhist faith and practice of people. The Buddha images for this period were predominately stone sculptures that were created previously or contemporaneously were influenced by Hindu and Mahayana Buddhist traditions. During the eleventh to twelfth century, the religious sculptures of the upper north of Thailand continued to exercise their influence on Dvaravati style. 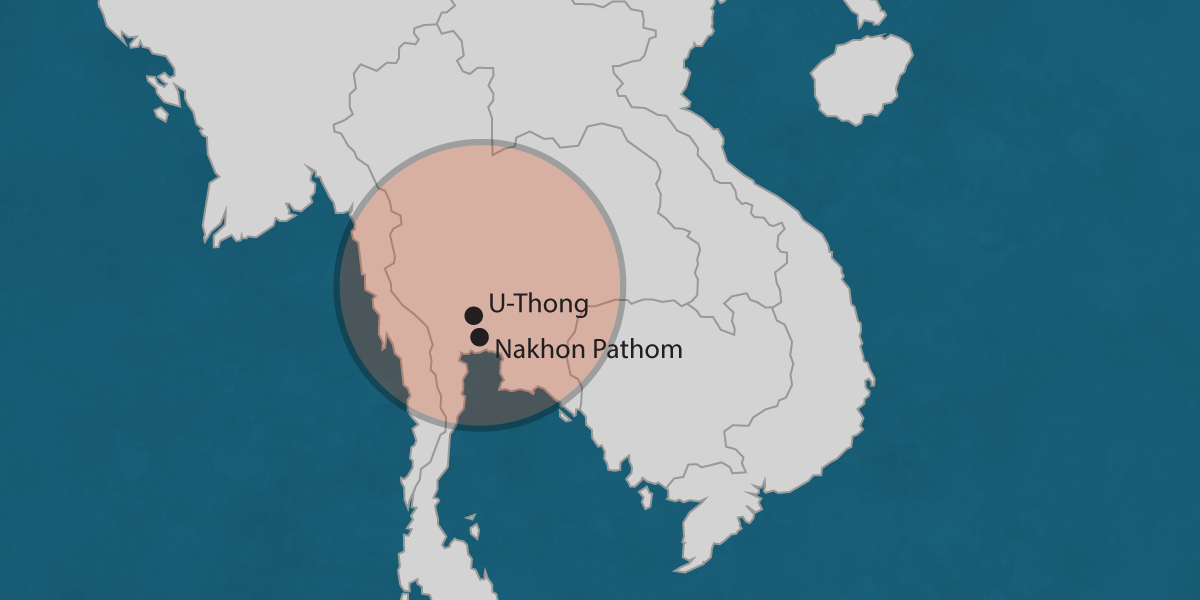 The Wheel of the Law and a Crouching Deer 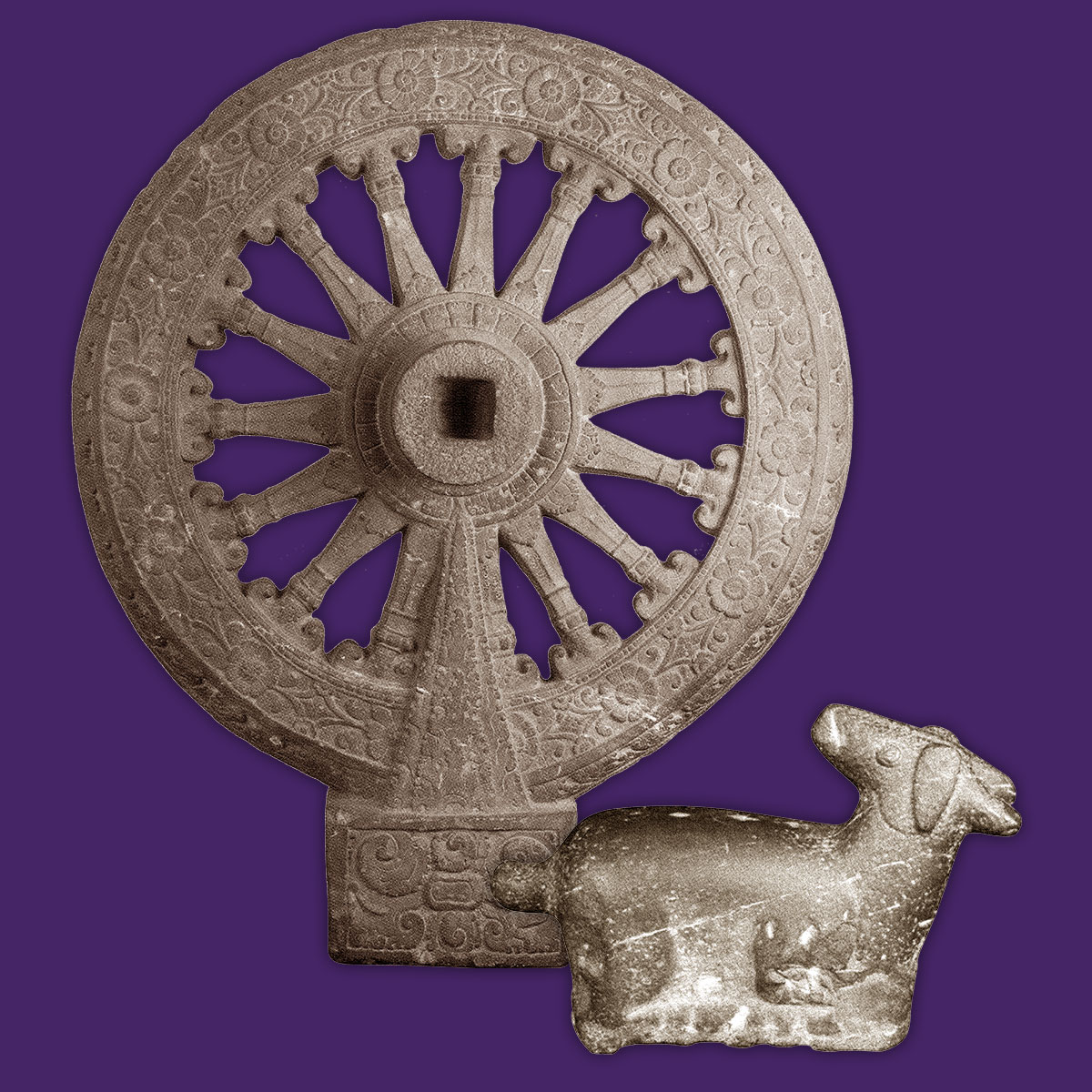 THE WHEEL OF THE LAW AND A CROUCHING DEER

Images of the Buddha were not made for several centuries after his death. His followers, instead, devised aniconic symbols to represent the significant events in his life: the bodhi tree represented his enlightenment; a footprint or empty throne, his presence; the lotus, his birth; the stupa, his death; and the Wheel of the Law, his teachings.

Symbolically, the Wheel represents the Buddhist doctrine spreading throughout the world. It is thought that the wheel rested on top of a tall column placed in the temple grounds, similar to the 3rd C BCE Ashoka Pillars in India that were inscribed with Buddhist teachings. The Pali inscriptions on the fifteen columnar spokes of this wheel, sculpted in the round, record the Buddha’s first teachings: the Four Noble Truths and the Eightfold Path.

This beautiful Wheel of the Law, a hallmark of the Dvaravati period, is delicately carved on both sides, with a rich pattern of blooming lotus flowers and fine diamond-shaped motifs. The deer below the wheel leans its head forward to listen to the Buddha’s First Sermon delivered in the Deer Park at Sarnath, India. 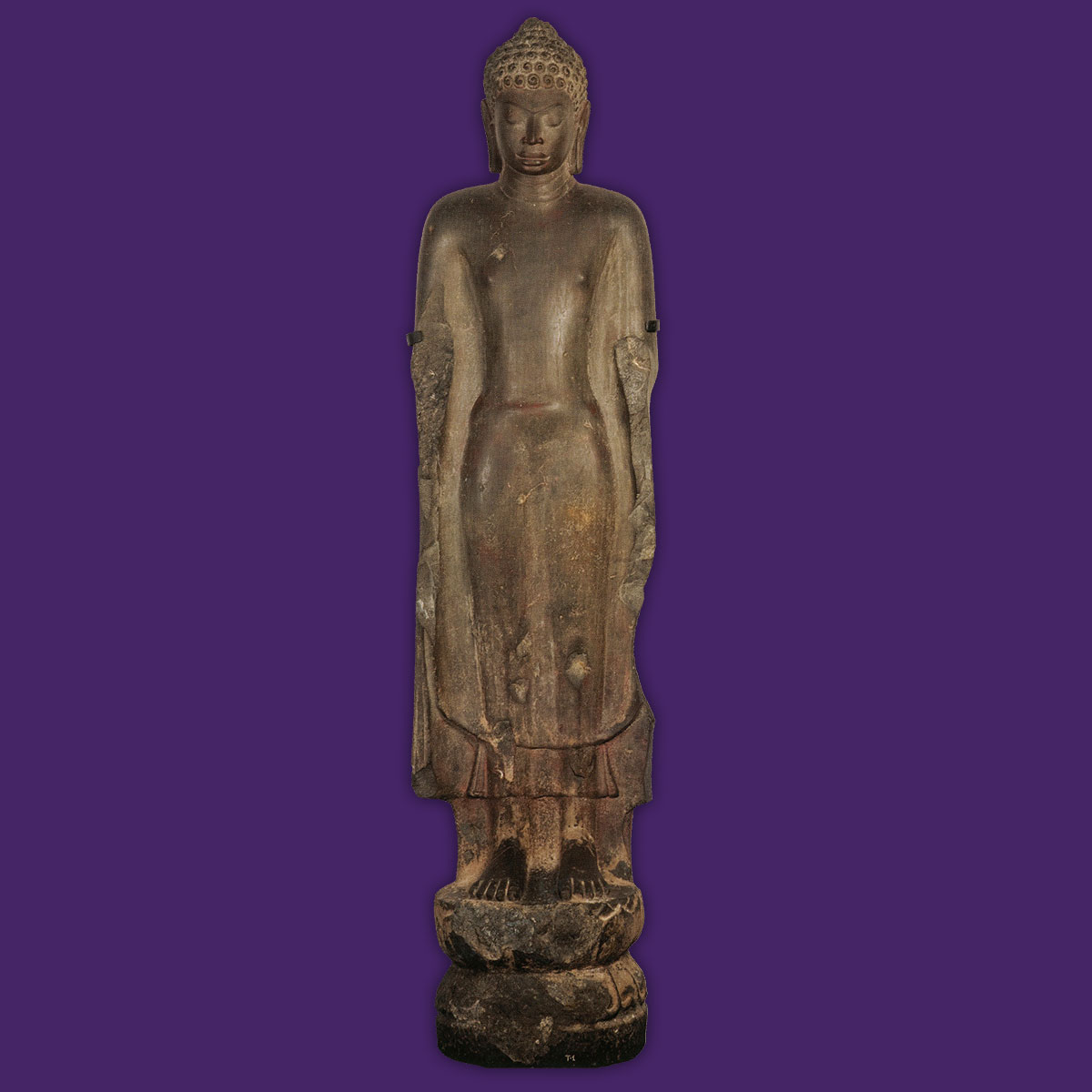 The Mon people, well established in the area that is now Thailand before the Thais migrated from China, are associated with the Dvaravati style and early Indian influences.

Both Mahayana and Theravada Buddhism inspired much of their art; stone sculptures and bronze works were dedicated to mythological subjects, while stucco and terracotta were kept for temple decorations and votive tablets.

This standing Buddha is typical of the style with its meditative look, imposing size and the symmetry of its U-shaped robe.

Serenity radiates from the burgeoning smile at the corner of the Buddha’s lips, very often observed in the Dvaravati style.