The Thai Buddhist art style known as U-thong or “Pre-Ayutthaya stood as a forerunner of the evolution of Ayutthaya style before the founding of the capital of Ayutthaya in 1350 CE at the Chao Phraya River basin in central Thailand. It is generally acknowledged to have Dvaravati, Lopburi (Ancient Khmer), and Thai backgrounds. It also continued to play an important role during the whole early period of Ayutthaya. Ayutthaya became the center of Siamese Kingdom (the former name of Thailand) during 1350 – 1767 CE. Ayutthaya developed its own artistic style. Much of the art produced during the period related to Buddhism. Some artworks of Ayutthaya apparently retained some features surviving from Sukhothai style. Nevertheless, some characteristics of the artworks reveal the profound difference separating the aesthetic and iconography of the two styles.

Hindu court rituals instilled an aura of sacred power reserved for the Devaraja. Impressive Buddha images, built in brick and cast in bronze, and other statues, royally adorned and crowned, blurred the line between king and Buddha. In 1767 after years of dynastic problems, an epidemic, and warfare, resources were limited, the city was sacked and burned by the Burmese. Most records were lost, so Siamese versions were rewritten in the late 18-19th C. Epic tales highlight an opulent city and wars fought on elephant back which live on today in the minds of the Thai people of today. 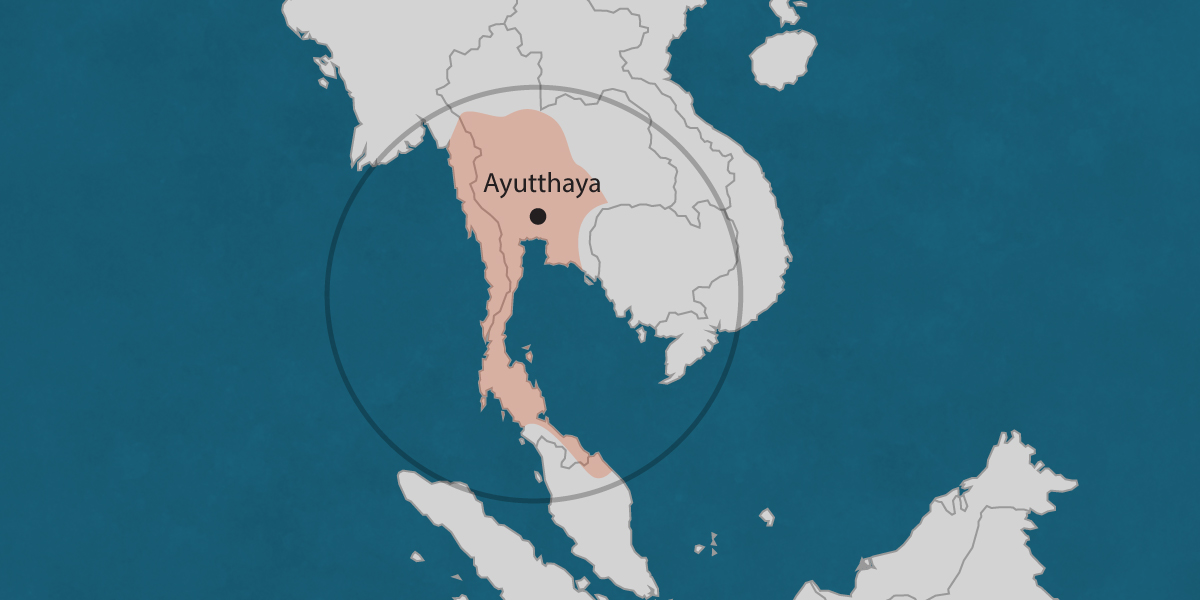 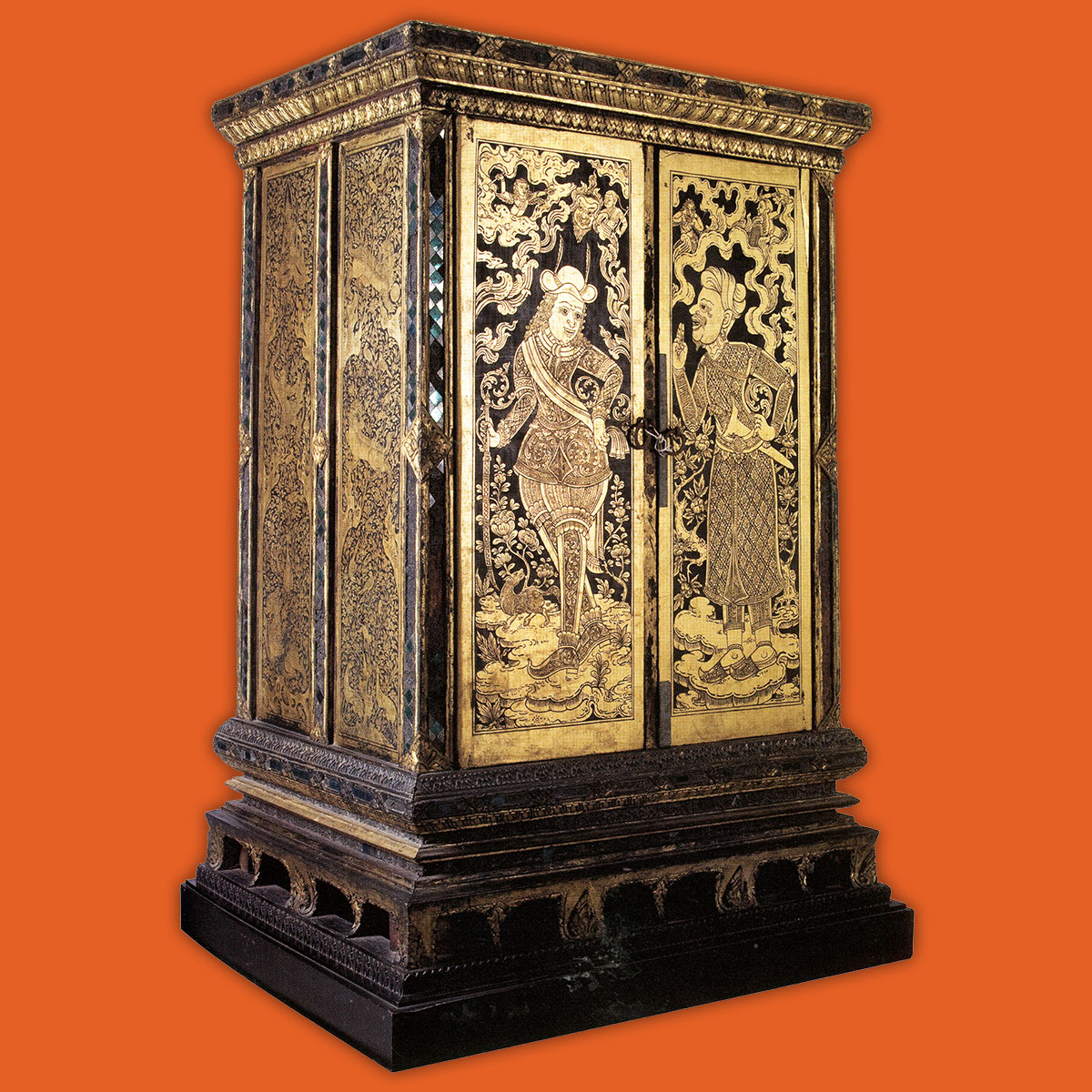 Uncertainty surrounds the identity of the two figures on this tuuphra tam lacquer sutra cabinet. The European could be Louis XIV, because the stance is similar to poses seen in portraits of him that were sent from Versailles to the Thai King Narai. The identity of the other figure remains a mystery. One possibility suggests it is the image of the Mughal Emperor Aurangzeb who was a contemporary of Louis XIV. However, the facial features do not match his and his attire is not kingly, opening the possibility of it being the Persian ruler Suleiman. Rhythmic flora, fauna and kranok flame motifs surround the figures. The gilded lacquer technique, called in Thai, lai rod nam or “wash with water”, comes from China. The wood is covered with three coats of lacquer and a gummy substance is applied to the areas to be kept black. The panel is then covered with gold leaf and washed so that only the gold fixed to the adhesive washes off. During the Ayutthaya period, mastery of this technique reached its height of expression showing a fine sensitivity of balance between black and gold. 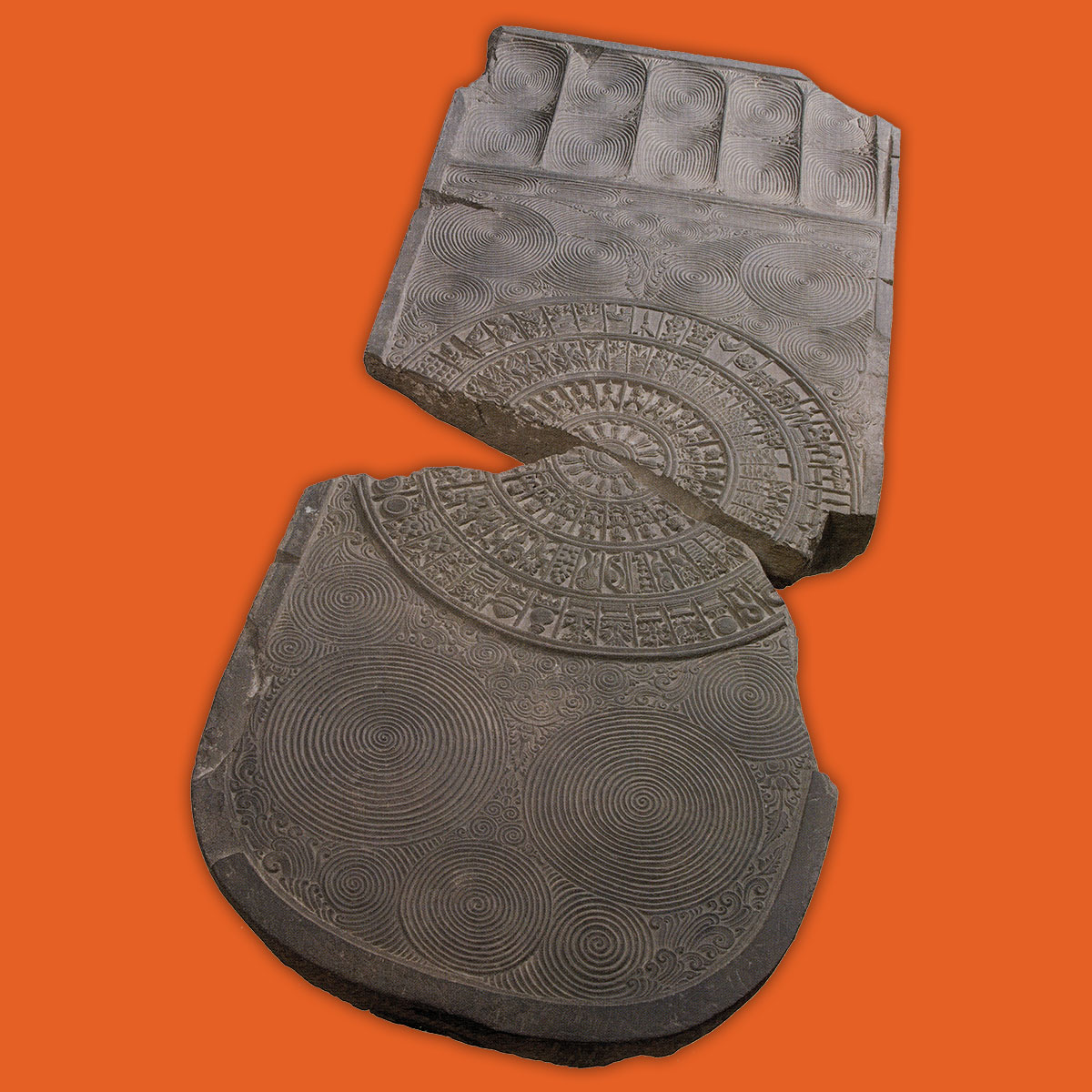 Carved with 108 auspicious symbols, this buddhapada, or Buddha’s footprint, represents the Buddha in aniconic form. On the sole of baby Siddhartha’s foot, the sage Asita found these same marks indicating that this child would become a great man. The Wheel of the Law, in the center, is surrounded by three concentric bands filled with symbols, which represent the structure of the universe in accordance with Buddhist cosmology. Close to the hub in the first band are the 16 symbols of the Brahma Realm and the six marks of the Deva Realm. In the next two bands are 86 symbols representing the Human Realm and include Mount Meru surrounded by seven lakes, seven mountain ranges, the ocean, the four continents, and the four cardinal directions. These marks are read starting with the spear opposite the middle toe, continuing clockwise. Footprints first appeared in the 2nd C BCE in India and incorporated different sizes, designs and styles in stone, bronze and gold. Some are believed to be the actual footprint of the Buddha. All of these footprints are highly venerated because they symbolize the everlasting presence and teachings of the Buddha.